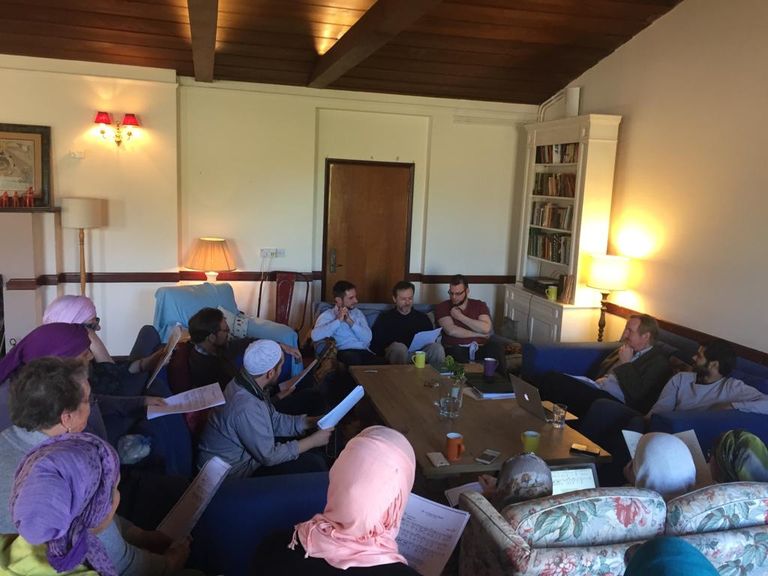 ‘Actions are by intentions’ (Hadith). The moment of entering Islam is a major spiritual transition for a human soul, and it needs to be honoured and approached with dignity, reverence and a good intention, not only in  the individual taking this step, but in the celebrant and the witnesses also. It is a time people usually remember for the rest of their lives, and has to be remembered as a time of peace, joy, and the awareness of  God’s presence.

To enter Islam is to affirm that God’s grace has been abundant in the
three great replenishments of Abrahamic religion: Judaism, Christianity and Islam, and presumptively in other traditions again, for the Holy Qur’an says: ‘There has never been a people among whom a Warner has not passed’ (35:24). To affirm the final and ‘sealing’ dispensation of Islam is to affirm everything good and true in the world’s religious history.

To join Islam is to affirm all the Divine names, both those of Beauty
(jamal), and also those of Majesty (jalal). God is infinitely Merciful
and Forgiving; but He also expects His creatures to conduct themselves with moral seriousness in life, and warns against the consequence of a destructive or a forgetful lifestyle. Entering Islam is to declare that one acknowledges one’s duty to live in a committed way which reflects the Divine qualities.

So the celebrant should, while ensuring that everyone at the ceremony is at ease and looked after, also maintain a prayerful inward attitude, remembering God, and the critical importance of this moment. He/she should not be too grave and intimidating, but should not be light-hearted either. Humour at any point is inappropriate.

The sincerity of the convert may occasionally be in doubt, particularly where a marriage is in view. The Sharia judges by externals, and does not probe people’s hearts. However it should be impressed upon the prospective convert that to change one’s religion is a serious matter, and that a person of integrity will never publicly profess a belief over which private scepticism remains in the heart. However the discussion of serious religious qualms and objections should be settled before the ceremony is arranged.

In the premodern Islamic world a conversion was often an elaborate and celebratory affair, with the prospective convert mounted on a fine horse and taken to the mosque, and given gifts. Today a conversion can happen anywhere, but it is important to respect the time and the individual by holding the ceremony in a quiet, reverent and beautiful place. Avoid a large public show (after Friday prayers, for instance), if the convert is not comfortable with this.

From the Sharia perspective witnesses are not strictly necessary. A
solitary conversion is entirely valid in God’s sight. However for the
conversion to be readily recognised by the community, it is preferable to have a ceremony guided by a celebrant (not necessarily an imam - any Muslim, male or female, can do this), and attended by two witnesses. It is preferable that they be adult male Muslims in good standing, but again, this is not a condition for the Shahada’s validity.

A certificate is not required, but is strongly recommended. It can
reassure families that a subsequent marriage is valid, and can also be useful in some Muslim countries in some circumstances where official papers require a statement of religious identity. It will also be necessary to obtain a Hajj or Umra visa. Guards at the Aqsa Mosque in Jerusalem sometimes do not allow people to enter unless they have a Muslim name in their passport, or can produce a convincing certificate of conversion. This is also the case for all mosques in Morocco.

The minimal form of a good ceremony involves the prospective convert uttering the Two Shahadas. It is sufficient for this to be in any language, but is preferred to be in Arabic also.

It is good for the celebrant to begin with a brief Qur’anic recitation,
to explain to all present what is about to happen, to take the hand of
the prospective convert (if of the same gender), to look him / her in
the eye, and to ask the prospective convert to repeat the Arabic words, one by one, or phrase by phrase, and then do the same in English.

The ceremony can be followed by a du’a prayer, and the Fatiha. It is
good to offer a gift at the end: a gentle book, and perhaps a gift of
fruit.

It is advisable to designate a Muslim mentor for the new convert, if
someone is not already acting in that role.

It is a privilege and an honour to welcome a soul into Islam, and the
celebrant and all present should regularly pray for the convert as he or she progresses in the religion.